Michigan based Pratt & Miller Defense recently updated their Trackless Moving Targets- Infantry variant this year for I/ITSEC 2017. The company makes 4×4 vehicles (with targets mounted on them) that move autonomously on a training ground and react to fire. Right now it appears that the company has human-sized targets and full vehicle shaped ones but ideally as long as it can fit on the chassis, the vehicle could probably work with the target. The company is trying to create a solution for the infantry wherein it resembles a more realistic battlefield instead of stationary Ivan targets that mechanically drop down when hit.

"The TMT-Infantry variant is currently being funded by the US Army’s PEO STRI office through a Rapid Innovation Fund (RIF). The TMT-I is being developed as an improvement over existing rail-based systems used by armed forces around the world for markmanship training, which are often seen as unrealistic.

The technology uses a highly-mobile 4×4 platform that can move across rough terrain and intelligently react to shots being fired. TMT-I leverages much of the technology developed for a vehicular version of the target, known as the TMT-V.

The TMT-V is currently in Phase 3 of a small business innovative research (SBIR) project, also funded through PEO STRI, which is looking at commercialising the technology for more widespread adoption. The company sees the potential for armed forces to use both TMT-I and TMT-V collaboratively, replicating complex battlefield scenarios."

Working through PEO STRI in Orlando, if this system can be adopted Army-wide, that would be a major training breakthrough for infantrymen deploying overseas. The real benefit of the system is that it could be especially helpful with the sort of counter-insurgencies that the U.S. Military finds itself fighting more and more often today. The bread and butter of the infantry is going up against a fortified enemy position. But with these insurgencies being anything but centralized and fighting from behind sandbags, the ability for a conventional infantry squad to respond to an unconventional threat is very important in this day and age. The Australian Army has been experimenting with these sorts of moving target systems for some time now. 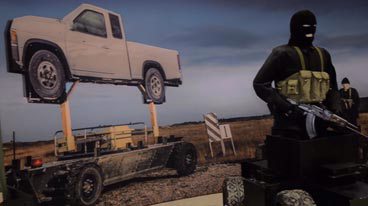