Several developments in robotic and autonomous targets, including 'shoot-back' capabilities, were revealed at the 2018 Interservice/Industry Training, Simulation and Education Conference (I/ITSEC) in Orlando in November.

The basic vehicle, which has a top speed of 35 mph, a 4,000 lb load-carrying capability, urethanefilled tyres, and a 10-hr battery life, moves on a GPS waypoint-based track. It can carry 2D and 3D vehicle targets. Pre-defined optional behaviour branches when under fire can be programmed, which can be linked to zone-based hit detection so that the reaction varies if the vehicle target is hit in the engine, cab, or body.

The unarmoured platform is designed for use with laser-based tactical engagement simulation systems (TESSs), or it can be equipped with battlefield effects simulators (BESs) to provide visual and acoustic representation of hostile fire with smoke and explosions.

With a light armour kit added, providing protection against ricochets and fragments, the platform is intended for live-fire use behind a protective berm and to replace or supplement fixed rail-based moving target systems. The heavy armour kit protects against 7.62 mm enhanced performance round (EPR), .50 cal ball, and 40 mm TP, and can be used on the open range. It can also be used to support air-ground live-fire training by towing a sledge-mounted target.

The infantry version (TMT-I) can move at up to 12 mph, uses the same GPS-based route programming, has zone-based hit detection with consequent reactive behaviour, will respond to near misses, and also has unarmoured and armoured versions. 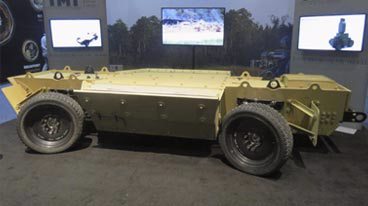